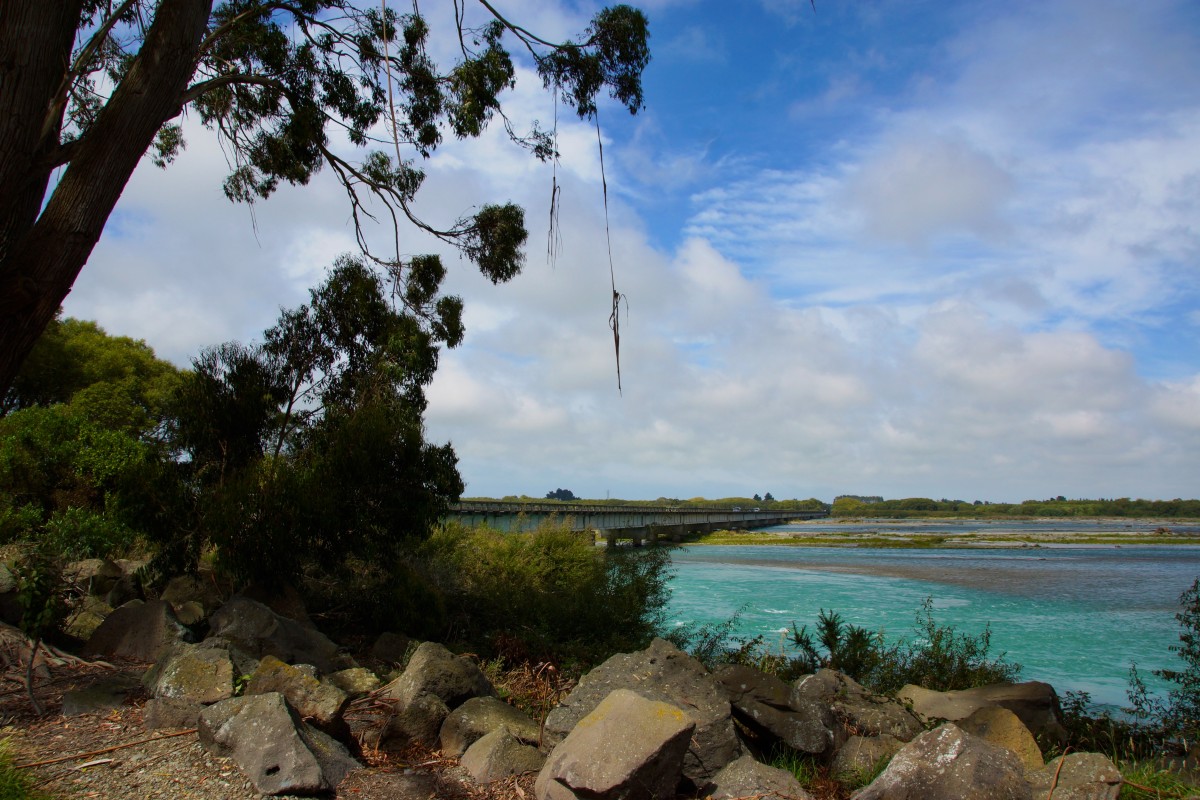 We left Oameru just before lunch, having stopped at our favourite supermarket to buy the makings. We parked at the Wataki bridge (see featured photo) to eat.

There were a couple of trees in the car park with really interesting bark. It was almost like it was braided rope. We kept North along Highway 1 to Ashburton where we expected the satnav to direct us straight along Highway 77 to our destination.  Instead, it took us further along Highway 1 before turning us left along a series of long straight roads which seemed to zig-zag towards Methven. It was flat  land with mountains in the background. Alongside the roads ran a fair sized irrigation channel along which water was pouring .  An example of the dependence of the area on water to keep farming going.

As we were checking into the motel at Methven the owner asked us whether we had been affected by the earthquake at Christchurch. Which earthquake?  The one earlier that afternoon!  Poor Christchurch. How unsettling to have yet another quake. Even if the damage was comparatively minor. On reflection, we might just have noticed something.

There isn’t really a lot to see in Methven.  It does tourist accommodation (summer and winter, the latter for the Mount Hutt ski slopes) as well as supporting the local agricultural community. However, we decided to have a walk and check out the local eateries. The blue pub was said to be a bit rough; the brown pub was described as OK and there was an Irish pub, the Dubliner, which was comparatively new.  After an inspection, we opted to eat there and asked about booking. “No, we don’t do that.  Just turn up and you can have a drink while you wait if you need to.” So we said we’d turn up just after seven and left to look at the rest of the town.

Just after seven we turned up only to be told that there was a party of 19 eating and there would be an hour’s wait. Bit of a melt down moment but we decided to go back to the motel and return later rather than going elsewhere. Good job we did because we had an excellent meal of lamb and salad. Probably one of the best meals we have had here.