Glenorchy at the Northern end of Lake Wakatipu, North West of Queenstown, is the entry point to an area of spectacular scenery where scenes from films like the Lord of the Rings and the Hobbit have been shot.  We didn’t have time for a tour of these but thought that a visit to Glenorchy was called for. 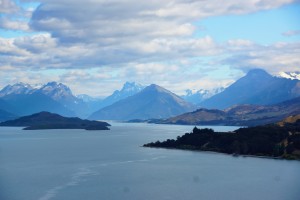 As we drove up the Glenorchy – Queenstown Road the scenery which unwound before us was spectacular. The calm, blue lake providing a perfect lead in to the mountains to the North and West.

On arrival at the jetty in Glenorchy, which once was the main point for the movement of people, goods and animals into and out of the area, we found that a bus-load of tourists had the same idea.  Some went off on a jet boat to the Dart River while others stayed to admire the scenery. 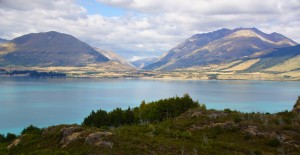 Photos taken we turned South back to Queenstown.  A road always looks different when travelled in the opposite direction and this was no exception.  We just had to stop by one of the lookouts, overlooking the lake to press the shutter one more time.

Our way, once past Queenstown stuck to the main highways.  SH6 to Cromwell then across the neck of Lake Dunstan onto SH8, down to Alexandra.  All fruit growing country.  Then right onto SH 85 and down to Raes Junction past Roxburgh, Teviot and Ettrick – could have been in the Scottish Borders again. On to SH8 again to reach SH1 at Clarksville and in to Dunedin.  A workmanlike route with no photo opportunities. The morning had provided ample.

After a small navigational mishap, easily rectified, we checked in to our apartments in Dunedin. Opposite the Cadbury’s factory and backing onto the local nick.  That said, they were more than adequate and had good high speed wi-fi.

Once checked in we thought we would find out about the train trips to the Taieri Gorge which had been recommended.  We walked down to Dunedin station, a

glorious early 20th Century building, to see what information was available.  The ticket office was shut but it looked like there was a morning trip which would suit us well. So we just had a look around and departed, planning to return the next morning.  Off to the New World supermarket (note to UK supermarkets, offer visitors a temporary discount card. It works wonders for retention.) to buy supper. 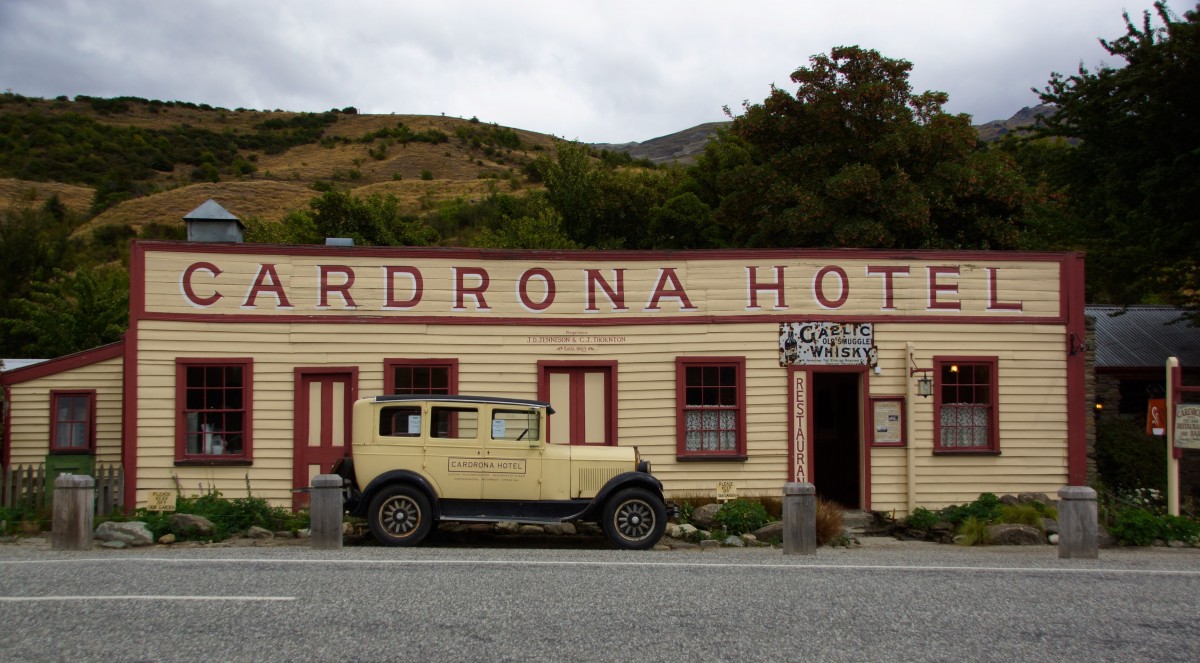 We had decided to take the short cut, the Cardrona Pass, from Wanaka to Queenstown for three reasons – speed, scenic value and the fact that Cardrona in the Scottish Borders is no distance at all from where my parents used to live. Before we set off we walked the track over Mount Iron, which is just outside Wanaka, in order to keep in practice. Just under 5k but a bit of climb and descent and great views.

The drive through the Pass was worthwhile. Cardrona is a well preserved little halt, worth a photo or two. The scenery on the drive is excellent and there are plenty of stopping places, particularly as you pass down the Crown Range Road at the end of the journey.

On the way into Queenstown we stopped off in Arrowtown.  This is a well preserved small settler community from the time of the gold rush and well worth a visit.  It documents quite clearly the differences in the circumstances of the European miners and the many Chinese who came to the area to work in the gold fields.

Queenstown is the liveliest place we have been to in New Zealand so far.  It is very much holiday town.  Every open air adventure is catered for.  There were a lot of young people and families enjoying themselves. But that wasn’t what we were about on our first visit there.  We had come to start the Milford Track and so our focus was on preparing for that.

We joined 45 other walkers at Ultimate Hikes HQ at 4.45 that afternoon.  We were briefed to within an inch of our lives, leant equipment like larger rucksacks which we might not have brought and given the opportunity to buy other stuff which might be useful. I succumbed to a pair of slip on rubber slippers for use in the lodges; the sandals I had brought for this had proved to rub badly. Then back to the apartment for dinner and a re-pack.

The aim of this blog is to allow family and friends, especially those who are not into the dreaded FB, to keep up with our goings on, particularly when we are boating or on our other travels.  Hope it works for you. Do let us know.