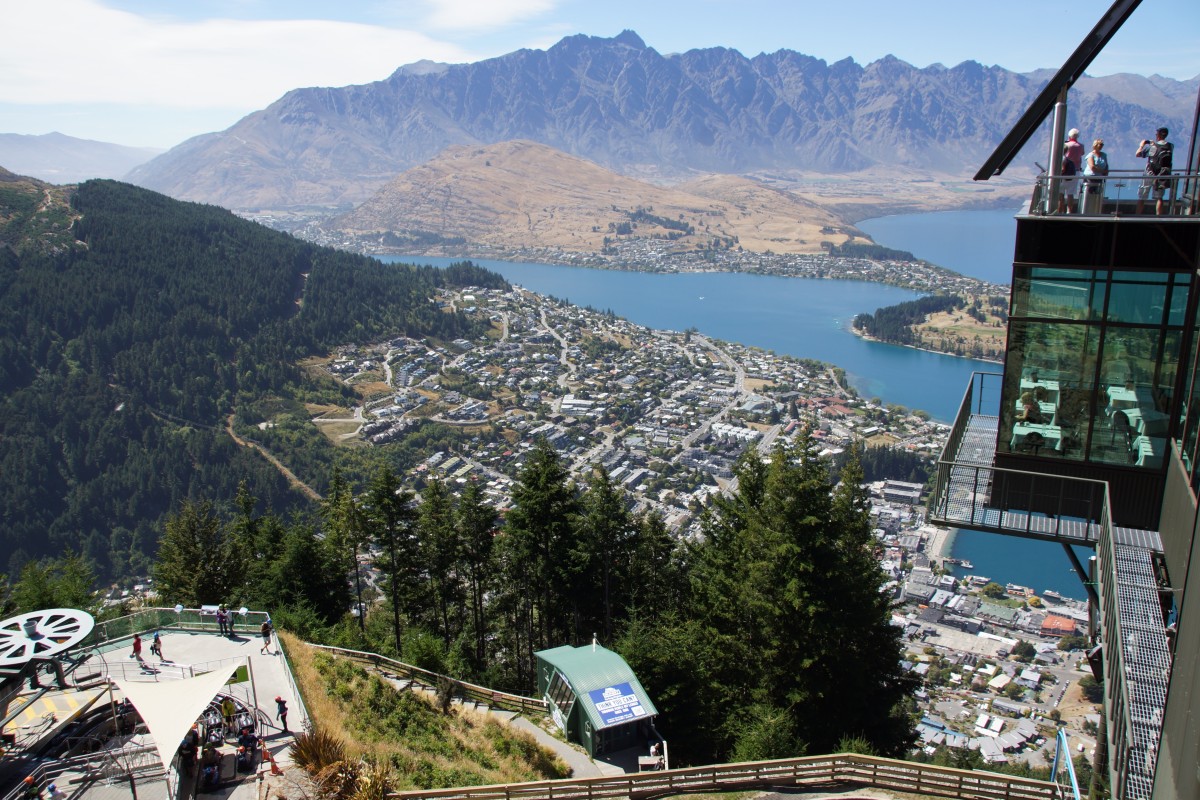 Queenstown is the “buzziest” place we have visited in New Zealand so far.  It is a resort town, possibly one of the capitals of extreme sports, and filled with people of all nationalities bent on enjoying themselves.  We joined in on our second visit, without resorting too much to the extreme.

We stayed again in the Best Western Cranberry, a short distance out along Gorge Road. Less than 5 minutes walk from the town centre.  Conveniently, they had a baggage room and had kept those belongings we did not need on the Milford Track (i.e. most of them).

Having said that we avoided extreme sports, our first event the next day was a jet-boat ride on Shotover Canyon.  We were early at the Station Building check in so our ride was advanced by 15 minutes.  When we got to the beach area we were issued with long waterproof overcoats and life jackets and invited to dump anything we didn’t want in the secure locker stowage.  We then went down and boarded the boat where we were briefed.  In essence this was “hang on tight”.

Once underway, the driver performed a couple of pirouettes for the camera before taking us haring down river, through shallows (the boat draws about 4 inches on the plane) and missing rocks by inches.  Every so often he put the boat into a 360 turn.  All very exhilarating until you remember that your safety is in the hands of a NZ water-borne petrol-head (the boat apparently used 40l of fuel every half hour!) Still, we enjoyed it.

Once we were off the boat we went to collect our belongings from the locker.  It was empty!  The staff had emptied it to allow newcomers to store things.  Gives secure a new meaning.  We also bought the pictures.  Only place we have done this so far. Cameras not allowed onboard and it would be difficult to capture these shots yourself.

After the coach trip back we made our way to the car rental, picked up our hire car (no upgrade this time) and dropped it back at the motel. We then walked to the cable car which takes people (and their bikes if they want) to the top of Bob’s Peak which overlooks the town. At the top we had a nice light lunch of Greek salad before going out to the viewing platform for a really good view of Queenstown.

We then had fun walking round watching people throw themselves down the mountain.  There were three methods:

Mountain bike.  We went to the start of the trail and listened to the bikers discussing previous injuries, a broken leg here, a damaged shoulder there. Not sure if there were any casualties.

The luge. These are dry slope sledges which run down a track at the top of the mountain. You take the luge up on a short chair lift section then down you go. There didn’t seem to be any age restrictions although we saw a girl of about 5 unable to understand how to control her sled and then carried down by her father. 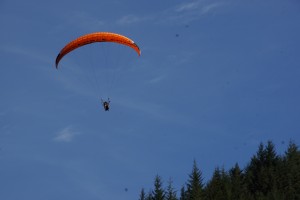 Paragliding.  Another opportunity for New Zealanders to chuck themselves off mountains.  Tandem flights were offered and a surprising number of people seemed ready to take up the offer. In truth, I was quite tempted.

We had decided that in the afternoon we would take a cruise on the lake on TSS Earnslaw (TSS = Twin Screw Ship) so after we got back from the Peak (By gondola. Nothing scary.) we set off to buy tickets.  We resisted the dinner cruises or the cream tea excursions to Walter’s Peak farm and settled for simple return tickets.  There was a bit of time to kill and so we had a bit of a wander around the area by the jetty.

Eventually Earnslaw hove into view, smoke pouring from her funnel as she slowed down (she is the last coal fired ship in the Southern Hemisphere). Once her speed was steady the smoke came under control and had ceased by the time she approached the jetty.

Once the ship was alongside all the incoming passengers disembarked and we all boarded amidships.  Cargo was handled forward.  The ship was pretty full.

We cruised out and back to Walter’s Peak farm jetty where passengers were changed and supplies for the farm restaurant disembarked.

Earnslaw is a fascinating example of old technology working.  She is driven by two  triple-expansion engines powered by two locomotive boilers. Unlike in most such vessels, visitors are allowed into the engine room.  It was surprisingly quiet, nothing like the noise you had in the machinery spaces of steam propelled warships.  Of course, the equipment was much less powerful and sophisticated.

The whole ship was redolent of times past.

After disembarking back in Queenstown we walked back to the apartment and a quiet supper.

One thought on “Queenstown”