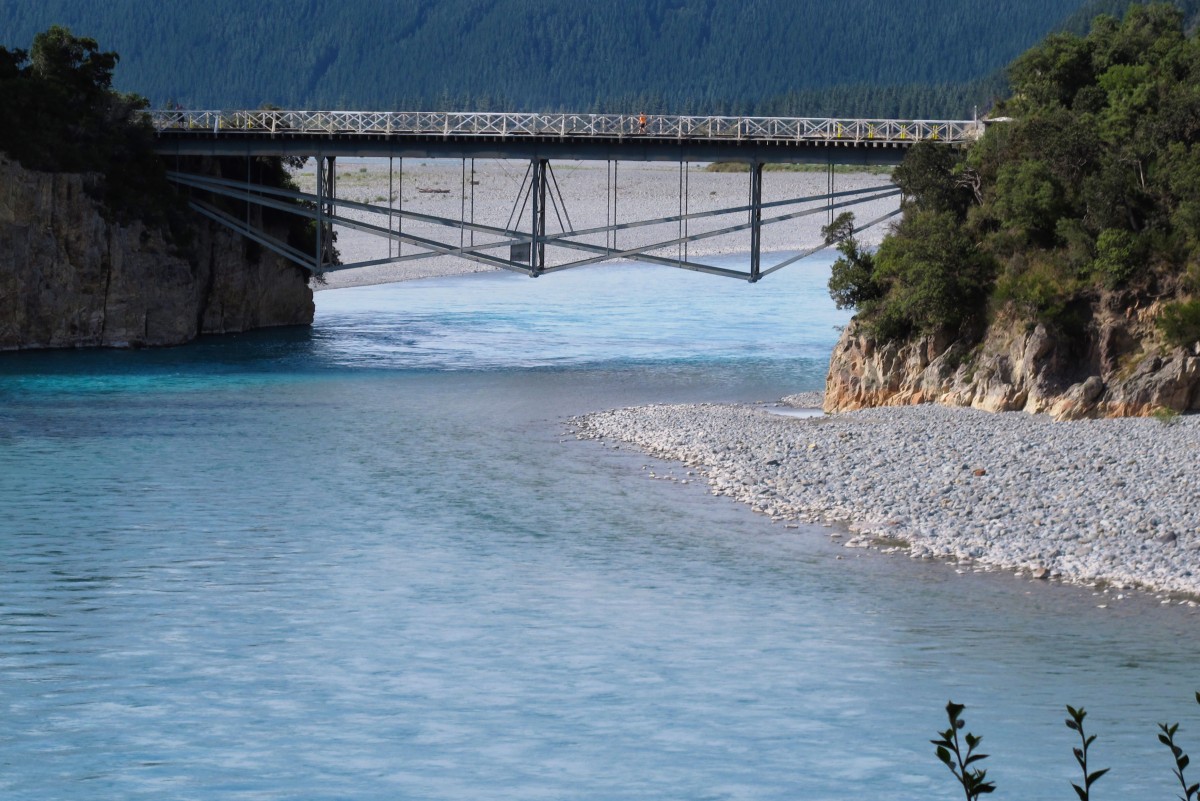 Why did we go to Methven, a town which has few tourist attractions in the summer? Well, we wanted to walk the Rakaia Gorge and to avoid retracing our route through Christchurch.  We had done some research while in UK but we went to the Methven iSite to get the DOC leaflet ($2) before we set off.

On arriving at the gorge we parked up, put on boots and set off, over the state highway, to the track which climbed up along the gorge edge. As we climbed, the jet boat which takes tourist up the gorge set off.  Although it appeared to do a couple of spins in the same way as the Shotover trip, we found out later that it was more a way to take people up the gorge and show them the scenery, including the geological formations.

The track took us up through typical NZ forest to the Lower Lookout where you get a really good view up the gorge then on to a more Alpine upland then back down to a forested area again. 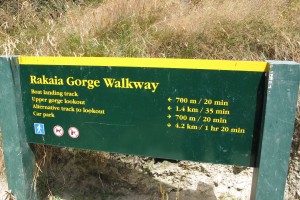 You reach a sign which offers two ways to reach the Upper Lookout.  We decided that the shorter was probably steeper and so took the left hand path.  This twisted and turned along a fairly narrow track so we needed to concentrate on putting feet in the right places.  Looking down I didn’t notice a branch growing out into the path and clouted it quite hard with my head, fell over and had to be helped from the bushes by Jane.  Paid more attention ahead after that.

Our guess about the two paths was wrong (as we subsequently proved when we took the alternative route back down from the lookout).  Steepness was the same. It was just longer. As we walked back we came to a junction at which a track, signposted “mines” led off.  As it was only a few minutes we decided to go down and have a look.

A couple of hundred meters down the track we saw two mine entrances, now shut with iron grilles but with clear evidence of the time when they were worked. They were up a gulley, off a river, miles from anywhere. How on earth did the Victorian surveyors locate them?

Walking back was very hot, but there was a stream of other walkers on their way out to the lookout.  We went slowly back to the end of the track which came onto the main road just at a single lane bridge.

I had hoped to get an iconic picture of one of New Zealand’s large trucks making its way over the bridge so I waited. And waited.  For what was supposed to be “an A road” there was very little traffic and I had to be content with this van. 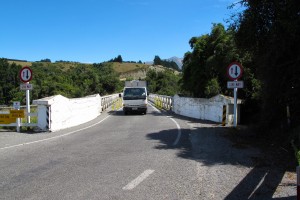 Once once we had eaten lunch we set off, back onto State Highway 77 then via SH 72 to rejoin SH1 to continue

North.  We had booked into what was described as a cottage on a small wine estate.  It was really a separate studio apartment.  Lovely and quite isolated. We were met and welcomed by Peter, the owner, who had just come back from trimming the vines for a cup of tea.

Since there was no restaurant in walking distance, having put the washing on, we went back down the main road for about 20k to Amberly where there was a good sized supermarket and bought supper.

On return the washing had finished and we needed to dry it.  No tumble dryer so we borrowed a clothes horse.  There was a strong, warm wind from the West and the clothes would dry quickly. If only the clothes horse would not blow over.  After the second collapse we used plastic bags to lash it between two of the veranda posts.

Supper with a bottle of the estate’s Chardonnay followed by a walk in the vines as the sun went down.  Fabulous.