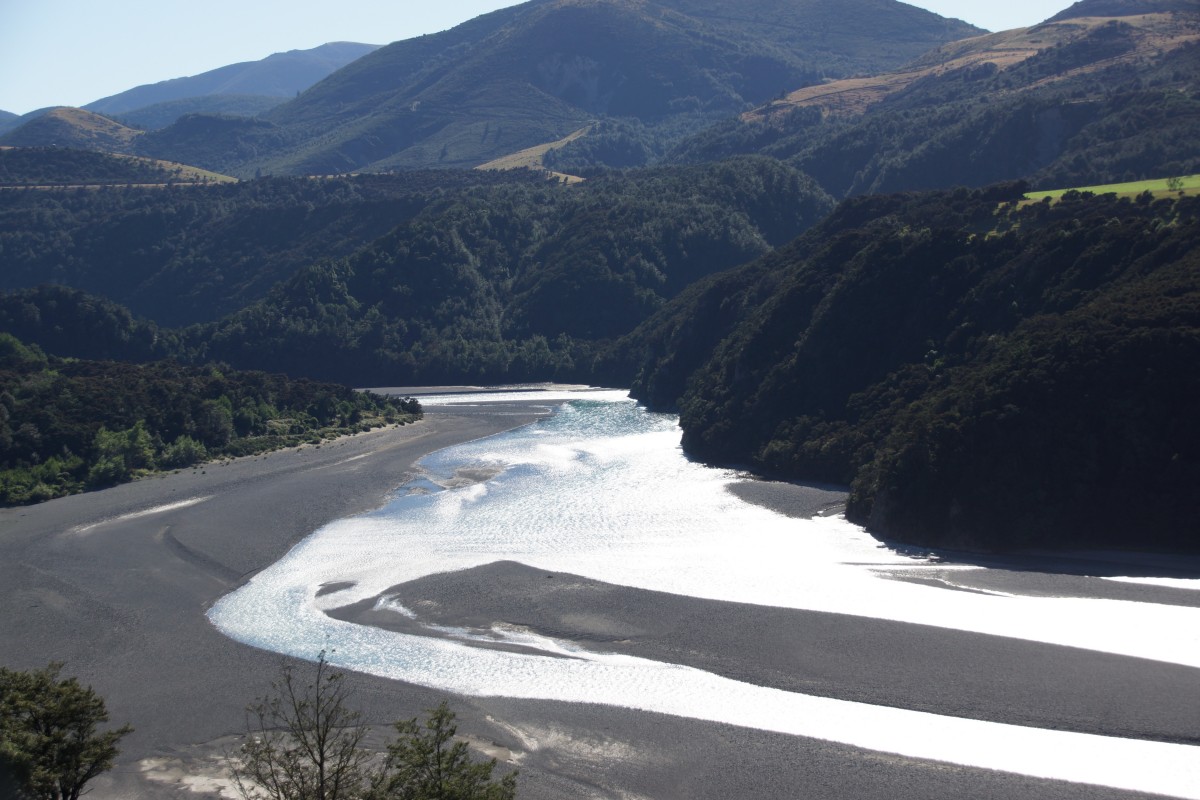 We had decided to travel from Christchurch to Greymouth by the TranzAlpine railway link in order to see the scenery across the island.  And, despite a comment from a fellow passenger that the Rockies are better, we don’t regret it.

Checking out of the hotel early, we were shuttled to the station in time to check in by 0745. Our baggage joined others’ in the baggage van (a some what old fashioned but very useful facility) at the front of the train but it was labelled since we planned to disembark at Moana, a couple of stops before Greymouth.

The TranzAlpine left Christchurch at 8.15. Our carriage was almost empty and we thought that the booking clerk must have been wrong the previous day when she  said that the train would be full.  However, we soon stopped at Darfield and the carriage filled with people who were on a tour.  All very organised.

We crossed the Canterbury plains, gaining height all the time. The clouds, down over the mountains to the West, soon burned off leaving us with hot sunshine.  The track on the Eastern side of the mountains weaves along the valley of the Waimakariri river and there are some excellent views.  Jane stayed in our seats while I went to the observation car, armed with the camera. And quickly returned. It was open at both sides and cold in the wind.  A jacket was called for.

Properly clad, I took up a position in the viewing car quite early in the journey when few others were about.  As the train moved up the valley, more people joined us until it became pretty crowded.  Staying on one side, I was able to keep a position from which to take photographs.  There were frequent short tunnels when it was necessary to make sure that camera and arms were inside the carriage.

At Arthur’s Pass station the tour party left us to make their way by coach to Franz Josef while additional engines were attached to the train to assist with the passage through the Otira Tunnel.  The tunnel is 8.5km long and has a steep gradient of 1 in 33. The engines make fumes which are sucked out by fan but the observation car is shut while passing through.

Once once we were through the tunnel it was only 35  minutes or so before the train reached Moana on Lake Brunner where we and our baggage left.  We had booked what was billed as a gentle drift down river where we could relax and learn about local nature, customs and legends. The rubber dinghy into which we got, and were given our own paddles didn’t quite seem to match the description.

In fact, we had quite a good afternoon assisting with paddling downstream (although the two guys who formed the crew insisted that they would have done all the work if we had wanted). We did learn to identify the local flax plant and to make simple woven objects from its leaves.

The weather was very hot and sunny and we were glad to land and to rejoin our luggage in a mini-bus to complete the journey to Greymouth.

One thought on “TranzAlpine to Greymouth”