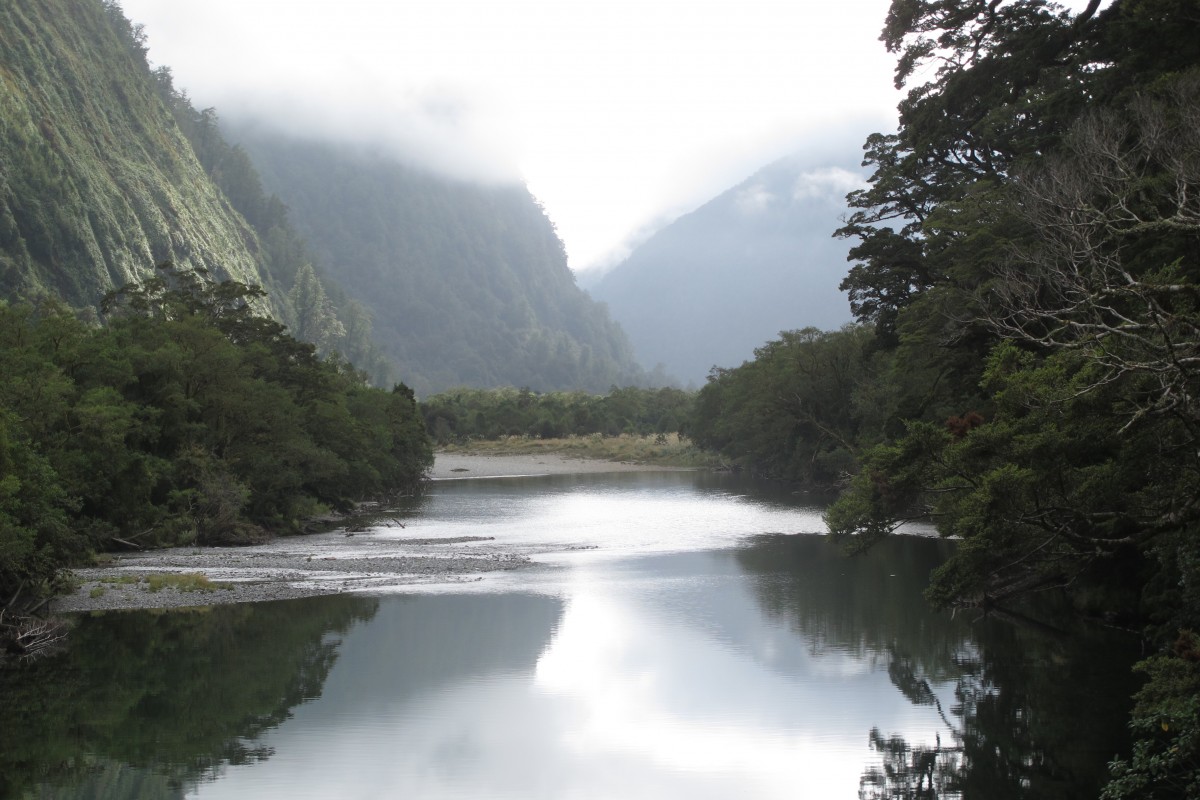 Day 4 is a 21 km walk out from Quintin Lodge, following the Arthur River.  We were a bit stiff and sore after the previous day but started out in the first group with team NZ/USA (Robyn, Stu and Steph) and led by Fumi.  The cloud was down in the valley and we were going at what we thought was a good pace until Fumi said that she needed to go ahead to prepare the morning break point at Boatshed.  We kept going but she just shifted up a couple of gears and soon disappeared over the horizon.

The track was generally well maintained and we soon came across evidence of the work put into this (although the wheelbarrow was a little incongruous).  However, all this effort does not make the track immune from the effects of nature and we had to negotiate a jumble of fallen trees brought down by a land slip.

Boathouse is just that, an old boathouse converted into a shelter for walkers.  It is well equipped, if Spartan.

While at Boathouse, Barry, our fishing fanatic, set out once again in search of the trout which had eluded him. He had carried his rod, flies and other equipment for the whole time, fishing on a number of occasions but without success. On this occasion he set out wading towards a spot where his land-based helpers had located a target.  We didn’t stop to watch but the rumour was that he had been successful. If so, he must have returned the fish since nobody appears to have seen it.

We moved on, back over the Arthur River and to Mackay Falls, alongside which sits Bell Rock.  This is hollow and it is possible to get inside by crawling in from the front.  The guide says you can stand. I couldn’t.

Just after we left Mackay Falls we came across a weka (pronounced wikka by the locals). Again this appeared unafraid, taking a close interest in Jane’s boot laces. A little further on, before we got to Giant’s Gate, the clouds parted briefly and Mitre Peak, which dominates Milford Sound was visible.  A photograph was taken in case this was the only opportunity.

From Giant’s Gate the track becomes easy, skirting the sides of Lake Ada and opening out to a double width in the last couple of miles.  We reached Sandfly Point, the end of the track, in very good time and so we had to wait until the booked time for the boat.  Fortunately the hut provided shelter from the large number of sand flies from which the area gets its name.

We boarded the second boat which sped us across to the village of Milford Sound.  A spectacular journey with Mitre Peak ahead in bright sunshine.  Into the final lodge.  Our room was at the front with a great view of the peak.  A bit of a rest followed by a evening to celebrate with the guides and our fellow walkers.