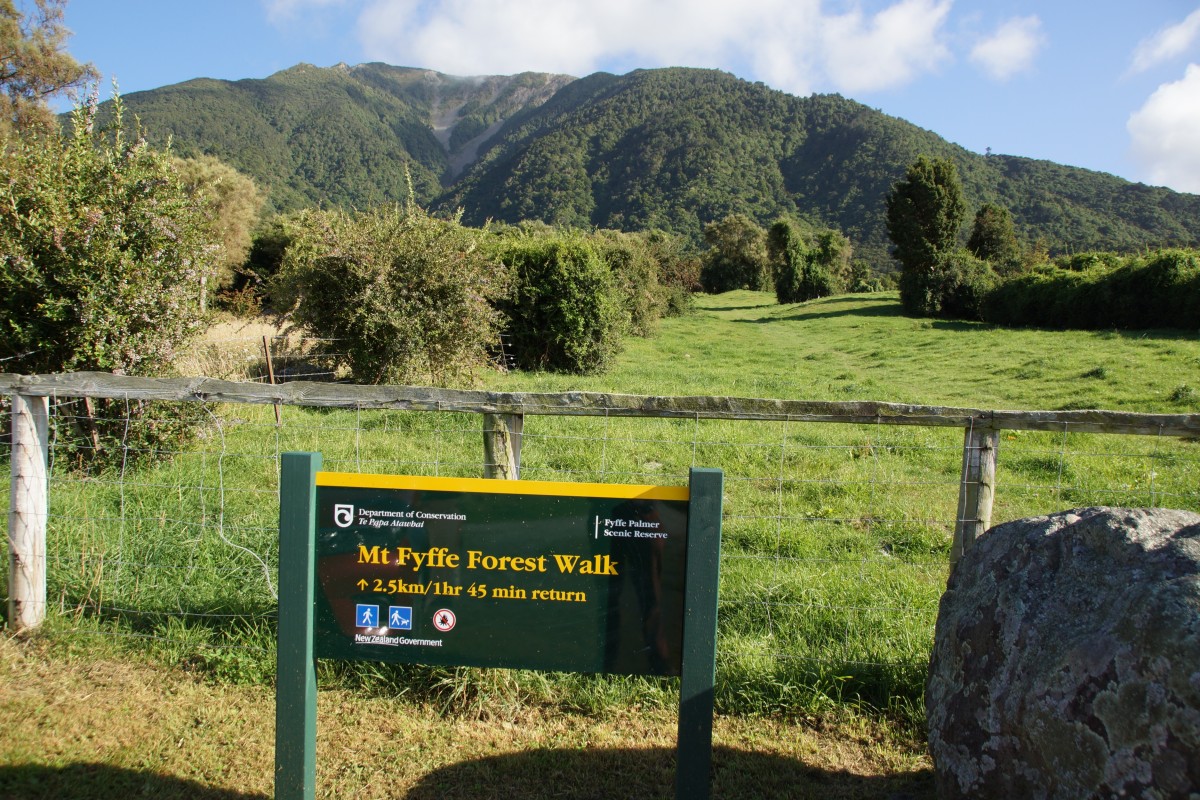 Before setting off to our next stop-over at Renwick near Blenheim we wanted to do another short walk just to keep in practice. Jane had found the Mount Fyffe Forest Walk in the approaches to Mount Fyffe, a few miles outside Kaikoura which DOC classify as medium, 2.5 k in length and taking about an hour and forty five minutes. We drove out to the parking area along a long, straight road which became a dirt track and put our boots on. Underneath the DOC sign was a piece of paper which said “This walk is not easy . It is mostly uphill. It is 3 km and takes 2 hours”.

Well, the first part was definitely uphill. Over a style, up a field, over another couple of styles and into a wooded area. Looking back at the top of the field gave a

great view back down the road. We climbed on up a pretty well maintained path until it joined a circular track. Which way to go? We decided to walk clockwise (we usually do). As we followed the path up we expected it to break out into a viewing point or other open area. It didn’t. Instead, at the top it just turned downhill. We thought the pitch on that section was steeper than our climb which had been fairly gentle. As we descended the cloud came in on the mountain. 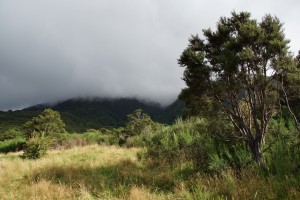 Back down after just over an hour on the track we took an inland detour before rejoining SH1. At about lunch time we reached Seddon where we stopped in a little supermarket to get the makings of a salad. We also bought a pack of three metal forks (there were no plastic ones on offer).

signs for “sea view”. The way took us through vineyards (Yealands and Brancott). Eventually we left the metalled road and took to a track which ended outside a farm drive after a kilometre or so.

We parked up in the shade of some pine trees, had a quick explore and then lunch. Ranch salad with only a fork to eat it is interesting. After lunch we walked through a gate and on a few hundred meters to look down on a beach which stretched back towards Cape Campbell.

On the way from Seddon to Renwick we passed over a bridge over the Atawere River. This was a fairly modern affair and it ran parallel to the old one. At the end was a viewpoint so we stopped for a picture. The old bridge served both rail and road, the tracks running above the highway.

As we had a bit of time in hand we decided to take a scenic detour. It was a yellow road on the map so should have been tarmac throughout. It wasn’t. The centre section was dirt and very twisty. Thankfully, again there was no traffic in the opposite direction. We did, however, see a passenger train (excursion as it had a dedicated viewing car).

We had timed our arrival in Renwick for just after 3 pm which we had found was the usual B&B check in time. Anglesea Lodge checked in after 4.00 so we drove into Blenheim to visit the iSite and have a cup of coffee. We parked in Seymour Square, a lovely public space. Great excitement. Seymour was the business partner of one of the people in Jane’s family tree. We walked round town and to the iSite followed by coffee.

Checking in after 4.00 we had a walk around to orientate ourselves. We decided supper should be at the Cork and Keg, the local “English ” pub. When the time came we had a good meal there. Initially we sat outside but when it got cold we went in and braved the Sky Sports.