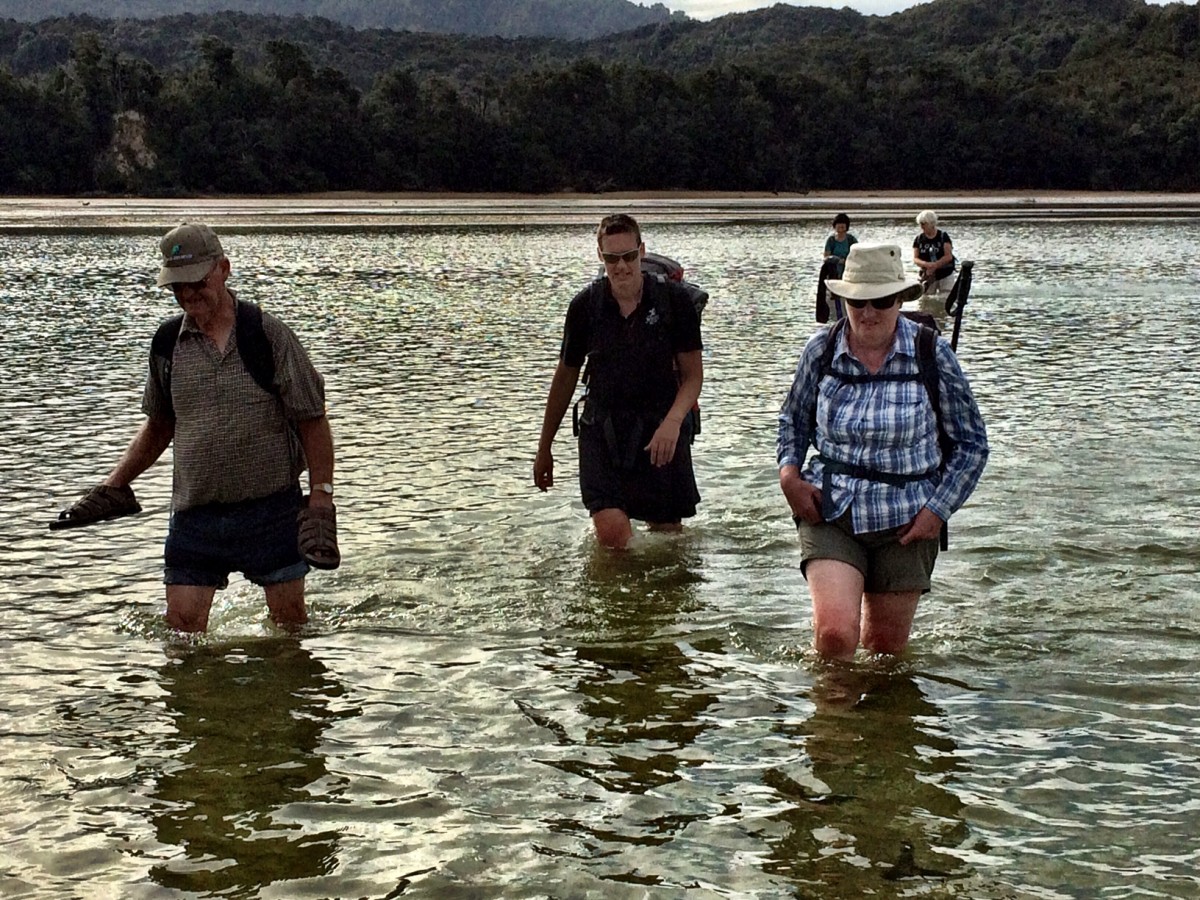 We had a leisurely start to our walk. Most of our group were being brought by coach from Nelson and would not arrive until about 1130 so we were able to have a bit of a drive around and look at the scenery.

We arrived well before we needed to and met Connie who was to be our excellent and long-suffering guide for the walk. We dropped the hold-all. When the others arrived they got sorted out and back on the coach which set off towards Kaiteriteri from where the boat would take us to the start of the walk. We hopped into the car and followed to Riwaka where we parked in a small town car park with Connie parked behind us. This arrangement is apparently safer than leaving cars parked in Motueka.

We joined the coach which set off again to Kaiteriteri where we had lunch while waiting for the boat. We were ten in the group, a much smaller number than we had on the Milford Track, enough for one guide to handle. Also much easier for people to get to know each other.

The boat arrived. It was fitted with a clever extending gangway which allowed easy access when the boat beached. We, and others, embarked and the boat set off along the coast calling in at a number of beaches where people, mostly on short walks, disembarked or boarded.

The skipper provided a commentary and visited points of interest such as Split Apple Rock and Tonga Island to allow passengers to see seals.

We landed at Totaranui, the furthest point on the boat’s schedule, and set off on the track. We were a group of multi-speed walkers. The young who keenly pushed ahead, middle paced and those who were happy to make steady progress. I think it was a bit difficult for Connie who wanted to tell us about the flora, fauna and a bit about the geology of New Zealand.

Quite early on the walk, when we were all walking together, Connie took those who wanted for a short detour off the track where there was an amazing tree, growing horizontally, along which people could climb, and delivered an ecology lesson there.

In Goat Bay the track runs across lovely golden sand and Connie made good use of this to show how New Zealand is affected by the movements of the tectonic plates. 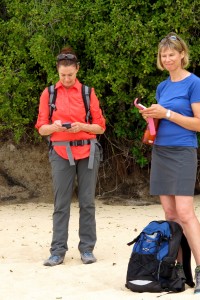 As we walked into the Abel Tasman National Park we were told that we would be moving into an area with very limited mobile signal. Those of us who were used to being in contact used every fleeting opportunity until the signal was lost.

As we walked along the beach, before climbing up over a large rock with s line of granite running through it (another supporting prop for Connie to tell us more about geology) we met a woman coming towards us, carrying a kayak paddle.  Later we saw what must have been her kayak being towed by another. We never did find out what the story was.

The approach to Meadowbank Homestead at Awaroa, the lodge we stayed in on the first night, is across a tidal creek. We had to wait until the water had receded far enough to make it safe to cross. Depth of water wasn’t the main issue; the strength of the ebbing tide was surprising. It tugged hard even when we were only calf deep.

The Meadowbank Homestead was originally built by William and Adele Hadfield in the 1880’s.  It was rebuilt in the late 20th C by their great granddaughter to be a lodge for those on the Abal Tasman with Wilsons. In addition to the house there are more rooms at the back.  Like the lodges we stayed in on the Milford Track it provided an excellent level of service.

The view from the front of the house overlooked the beach and was stunning.  Our room was at the front and even the bathroom window looked onto the bay. Another contender for “best view from the room” I think.