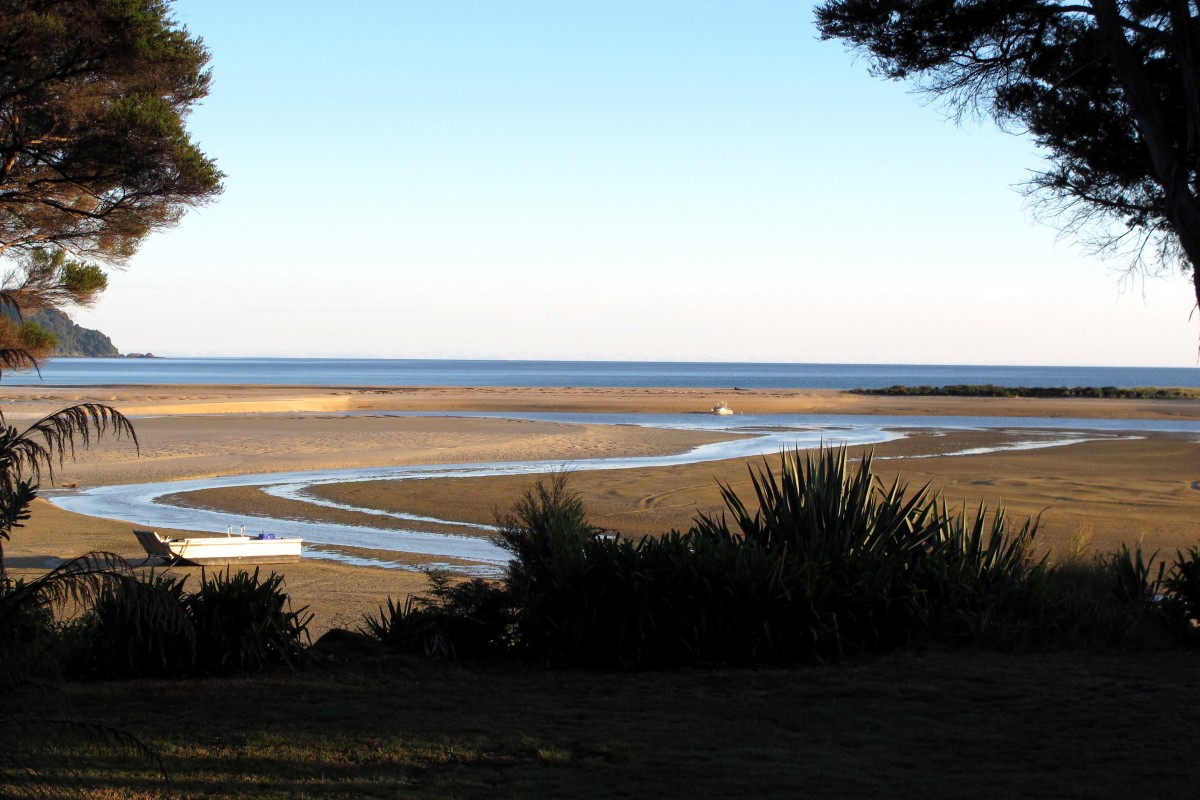 The forecast for our second day’s walking was good.  And when we went outside the view across the beach seemed to promise a perfect day.

We set off in waves.  Our two steady walkers wanted to start early.  Their plan was to walk to Tonga Quarry beach and to catch the boat from there to our next overnight stop at a Torrent Bay.  This would give time to relax before the rest of us arrived and would avoid the suspension bridge over Falls River. Connie briefed them on how to stay on track and off they went.

The rest of us followed.  It was soon clear that the younger members of the group were keen to push on.  Connie stayed with we oldies and so we almost had our own dedicated guide.

The walk started upwards to take us over Tonga Saddle to Tonga Quarry.  It included what Connie described as “a bit of a toughie”. Nothing like the steep bits of the Milford though. As we got towards the top the views both forward and looking back towards Awaroa were spectacular.

The track down from the saddle reaches the beach at Tonga Bay via a bridge and a board walk. Here we saw another Weka and a couple of busy Oyster Catchers.

By the time we got to Tonga Quarry Connie reckoned that we should have caught up with our steady walking group.  At the Quarry beach is a shelter with basic catering arrangements.  Here we met up again with our faster

walkers. There were also a number of Wilsons’ kayak instructors who were to guide Anna, one of our group, in a kayak to Torrent Bay and also to shepherd some of a five-day walking group. They had been on site for some time but they had seen nothing of our two.  Connie radioed the lodge to make further enquiries and, as there was little else we could sensibly do, we continued our walk.

From Tonga Quarry the track went up again, over another hill, and down

to Bark Bay and met up with our “steadies”.  They had been walking well and decided that they might as well walk the whole track. I’m sure Connie was relieved to see them. We had lunch there and were joined by the kayak group.

After lunch the scenery just continued.  We crossed the swing bridge at Falls River then looked down at Frenchmen’s Bay which all the guides we spoke to reckoned was the prettiest spot on the Abel Tasman. Connie showed us an Easter orchid plant. Then, eventually, we were able to look down at our destination, Torrent Bay and Torrent Bay Lodge, our stop for the night.

Again the Lodge was very pleasant and we had a room in the main house. The water in the bay in front of the house was shallow.  When we went in to swim we had to walk out a good distance before we could float easily.