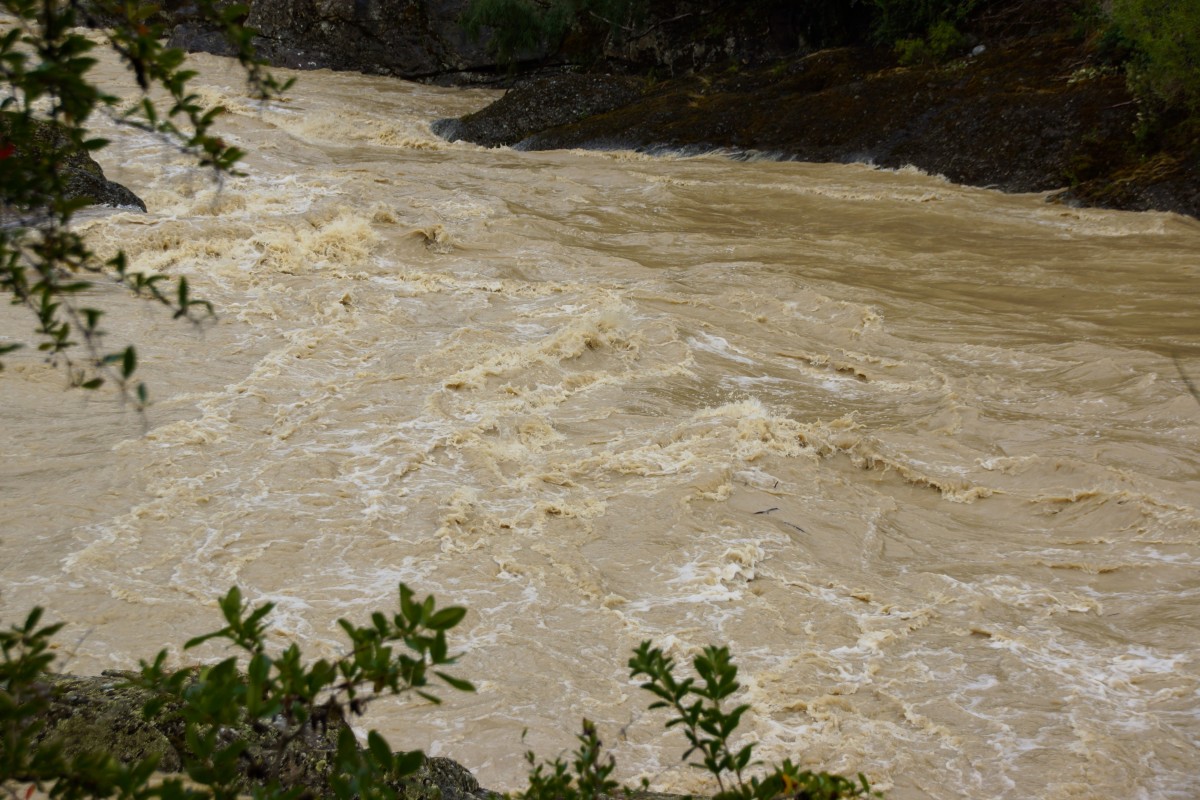 The following morning we drove over to Jim and Sheila’s.  Before the dogs went to the kennels they were taken down for a walk on the salt flats by the bay. This was new walking ground which Sheila had only recently explored. We found that it was difficult going in the wet, muddy and slippery.  So the walk was a short one.

The previous evening we had debated whether we should go from Nelson to Hanmer Springs via “the back road” over the bush from St Arnaud.  It is metalled but not tarred so should be passable in a vehicle without 4WD. In the morning Jim phoned the Department of Conservation (DOC) to check on the state of the road to be told that, after all the rain, two streams which had to be forded were now rivers and would probably be impassable.  So we set off to retrace our route to Hanmer.

We thought that it would be good on the way to look at the effect the rain had had on the rivers.  When we set off it was still a bit overcast, although the sun was breaking through.

We drove down SH 6 to Wakefield, near to where Jim and Sheila lived previously, stopped for a cup of coffee and continued on to an old corrugated iron farm house which is apparently the most photographed house in the country; a favourite for wedding pictures.  We then stopped and had a brief look, from the road, at Jim and Sheila’s old place.

Near Murchison we pulled in to look at the place where the Mangles River joins the Buller.  The strength of the streams was very evident, as was the difference in colour between the two streams.  We also came across a group of college students, studying tourism, who has just carried out a 10km white water raft experience as part of their course. Must have been interesting.

We also went to the swing bridge over the Buller.  This is billed as the longest swing bridge in NZ. It certainly swings and was quite slippery when it rained.

Also in the same area we visited the Maruia Falls which were formed by a land slip and subsequent erosion after the 1929 Murchison earthquake.

Driving on we stopped for lunch before the Lewis Pass.  Of course it rained and the sand flies started to invade the car which didn’t lend itself to a convivial picnic. 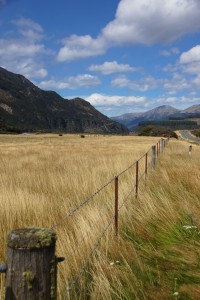 On up the Lewis Pass with a couple of stops.  One was by a field next to the river for a typically NZ view.

The next view point was where we had stopped on the way to Nelson.  I wanted to see whether there was a difference in the river.  There was a bit more water in it but the colour had changed completely to a battleship grey.

While we were there I went to the top end of the pull-in to get a better view of the river.  When I turned I saw Jim and Sheila’s vehicle rolling slowly back towards our hire car.  Jane appeared to be between the vehicles pushing to try to stop an impact.  Fortunately she was not and the car stopped.  Apparently Jim had left it running in park but without applying the brake.  Sheila thought the engine should be stopped. No engine = no braking.  It was very close!

As we approached Hanmer the sun came out again and gave us a great view of the river Hanmer. 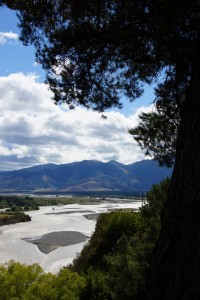 Having checked in, we had a wander round town before having supper at the Irish Pub.