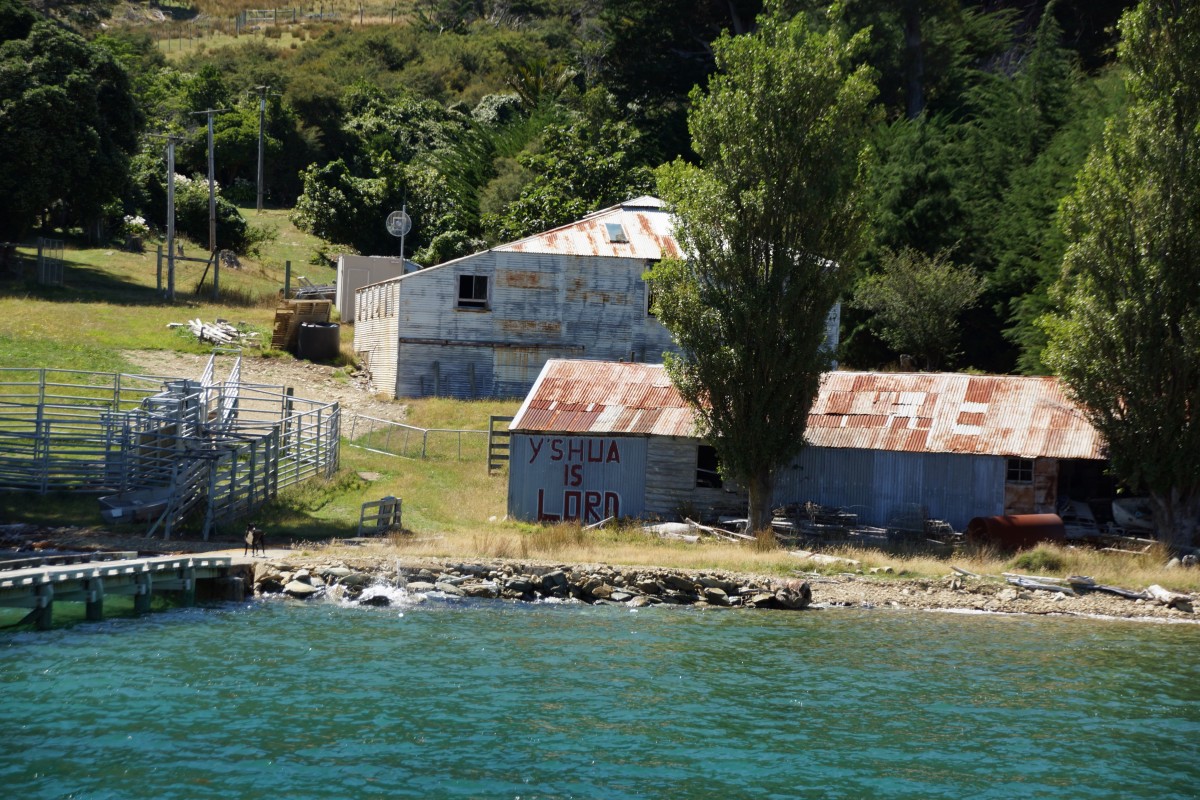 The following morning we woke to yet another glorious day. After breakfast we set off to the pier to catch the Pelorus Mail Boat. I went via the local bakery to pick up sandwiches for lunch. When I caught up with Jane at the pier we realised that I had forgotten to bring the dark glasses so I went back to the motel to pick them up.

The mail boat runs on Tuesdays, Thursdays and Fridays. It covers a different route each day and carries goods, possibly animals and local passengers as well as mail and fare-paying tourists. We were on the Thursday route which goes out as far as Beatrix Bay, not the farthest of the routes. Many of the places the routes serve have no road link. Other houses overlooking the sound are very expensive and have all mod cons.

As we left there was no wind and the water was glassy smooth.

We were one of a number of boats on the move that morning.  Some with greater urgency than others.

Jim, our skipper, was an ex-airline pilot from Elgin in Scotland. He provided a good running commentary as well as managing his boat. The

As we went out along the route we passed Pipi Beach. This is apparently where the settlers from the outer stations, in the days before ferries were organised, would stop and sleep under their upturned boats on the journey to and from Havelock. An alternative, practiced by what must have been a formidable lady, was to row to the town and back on the same day. Even if she got the tides right this must have been hard work. 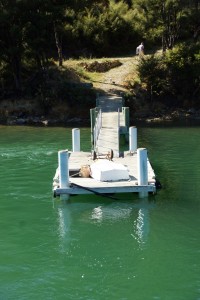 Her modern day equivalent takes the mail boat then gets off at this jetty.  She then walks for 15 minutes to where her rowing boar is secured then returns in this to pick up her shopping.

As we went along the route Jim did his best to educate us about the activities taking place in the Sound. We saw salmon farms, We went through mussel farms and had the process explained to us.

We saw logging taking place on the hills around. This is a managed activity even if harvesting the logs does cause scars on the landscape.

And we went to the local gannet colony to watch their flying displays.  Their landings are not very good.

On the way back we called at the Jacob’s Bay picnic area for people to get off, stretch their legs or have a swim. Unfortunately there was a private cruiser moored on the jetty so Jim secured somewhat precariously across the end of the jetty to let people off. He then stood off until the pleasure boat had left. We went for a walk up to a lookout and it was a bit disconcerting to see the boat leave while we were ashore but it soon returned and secured in its normal place where some used it as a diving board. 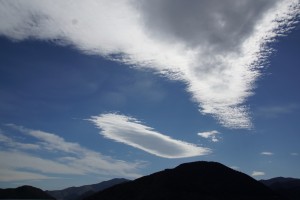 On the final part of the journey we saw a very scenic cloud formed above the mountains. 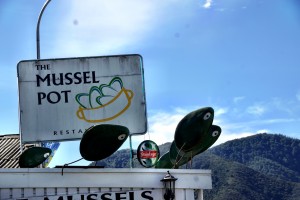 Shortly after arrival Jim Kennard joined us and we had a great mussel-fest. Ours were steamed, Jim’s were baked which was, we thought, the better option.