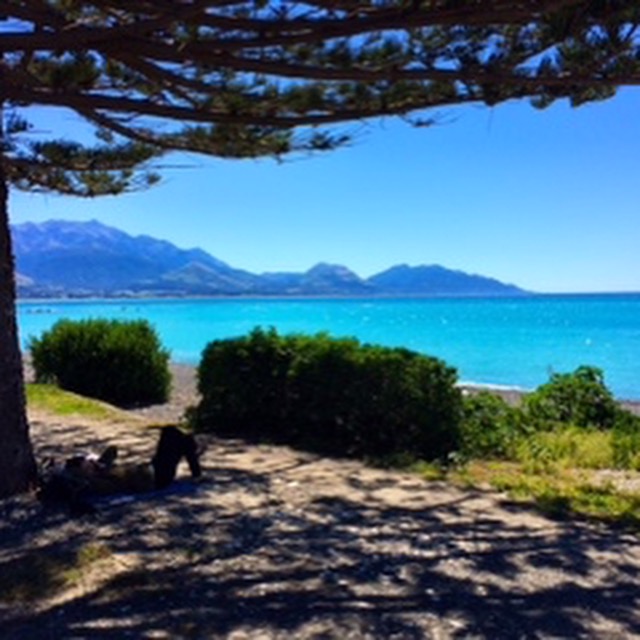 The next day Jim and Sheila were to return to Nelson so Sheila could fly to Australia to see their daughter, Laura and her family. We would make our way to Kaikoura to meet the dolphins. Before leaving we all needed to be well fortified so it was off to Mumbles cafe where Jim and Sheila had eaten well in the past. We walked through the grounds of the old Queen Mary hospital, established during WW1 for shell-shocked servicemen, which was closed in 2003. It was a beautiful morning and the buildings looked ready to inhabit. Hopefully the local council will find a developer who can treat the site sympathetically.

On reaching the cafe it was a full NZ for three of us while Sheila (or was it Miriam Margolyes?) had the veggie equivalent.

We were full when we walked back to the motel, through a small market, to check out from the motel.

It had been really great to see Jim and Sheila again after such a time and we had thoroughly enjoyed our time with them but all good things come to an end and so we had to say farewell and turn towards the coast again, down SH7 then Scenic Route 70.

It was still a glorious day when we reached Kaikoura. Before checking in to the new motel we decided that we would drive to the Southern end of the bay where we climbed up to a lookout which allowed us to see the strata in the rocks below and an area opposite which had been a Maori pa site.

We also thought that we should confirm the arrangements for our dolphin swim in the morning. We signed the usual disclaimers and were told that the weather would be generally OK but there might be a bit of a lop. Motion sickness pills might be an idea. So we went into town to buy some at the pharmacy. It was shut – at 1.30 on a Saturday afternoon, having closed at 12.30.

OK. No worries as they say here, the Internet showed a possible pharmacy in Clarence, about 20 k North of Kaikoura. We would investigate that and also look at young seals at Oahu as recommended by Jim and Sheila. Got to Clarence and drove straight through. It was effectively nothing more than a caravan park.

On to check out Nin’s Bin, a caravan on the shore which sold large crayfish, where we planned to lunch the following day. Quite pricey (over $100 for a big specimen) but it had been recommended by Ant and Sue.

The woman in Nin’s Bin confirmed that the seals were about another 5k up the road. We drove on and stopped opposite the entrance to a track which leads up a stream to a pool and waterfall. At the right time in the season seal pups make

their way up to the pool and stay there for a time while their mothers are hunting at sea. We walked up the track. Not a pup in sight. Clearly the wrong season (subsequent investigations show they go up in the winter). However, a lookout point very close to the parking for the track gave an excellent view over rocks and pools where pups gambolled while mums watched.

Cooked our own supper followed by an early night since we had to be back at Dolphin Encounters at 5.10 the following morning. We hoped that the trucks which passed within 15 m of our room on a bend in SH1 wouldn’t keep us awake. In fact, there was more noise from the wind.

One thought on “Off to Kaikoura”