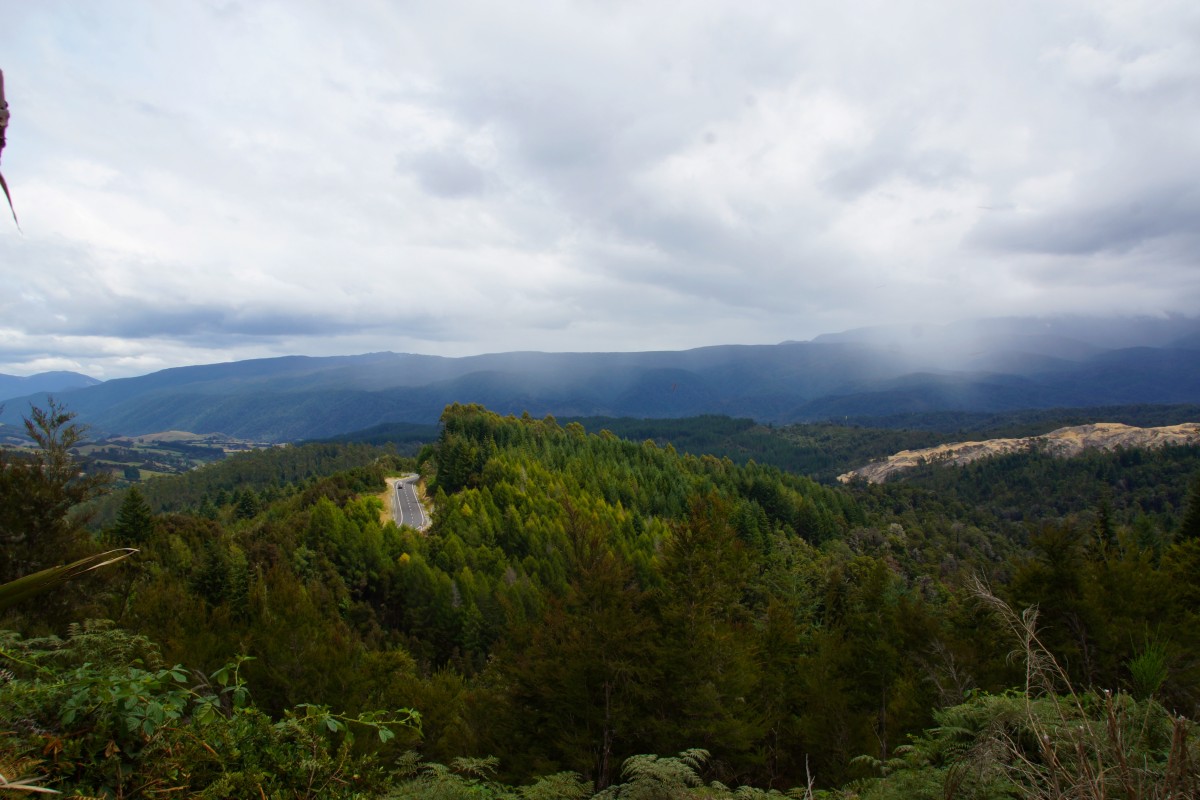 the road we kept passing huge sprays, pouring water onto the farmland, and smaller systems more like those you use to water the lawn. We had seen similar arrangements in many of the agricultural parts of the South Island and most of the water was going onto grass not arable crops.   It seemed strange that a livestock industry should be so dependent on irrigation. 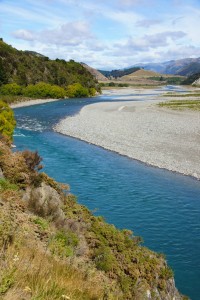 SH7 runs via the Amuri and Lewis Passes.  Neither had any form of indication that the top had been reached which was a bit disappointing. We did stop to take a photograph after the road to Hanmer Springs turns off. The river looked so inviting. The journey was uneventful. Our main excitement was on the Lewis Pass when a wide load escort vehicle, instead of  just warning of the load’s arrival, insisted that all oncoming traffic should stop and pull into the side of the road.  We sat and waited for some time until a low-loader, carrying a crawler excavator, hove into view.  It was no wider than the usual wide load but, given the twisting of the road, it occupied all the road in some places.

At Springs Junction we turned North on SH65.  This runs over 80 km to join SH6 near Murchison where we stopped to buy water.  The weather was sunny and very hot. The water was cold. Great.

Shortly after joining SH6 we passed over Hope Saddle and, enticed by a lookout sign, stopped to take in the view. In general, NZ lookouts provide great views over some part of the surrounding countryside.  Unfortunately, the view from Hope Saddle was disappointing.  Since the lookout was put in place the trees have grown and now obscure what once must have been a great vista.

As we approached Nelson, we phoned Jim and Sheila Kennard, old friends with whom we planned to spend the next few days to let them know when we would arrive.  We booked into our room in the motor lodge and Jim then picked us up.  We drove to their new, temporary home and had a cup of tea and a chat.

Next, a drive round town (it had started raining when we arrived at the

motel) before a drink and supper.  We ate in Little India, an excellent restaurant where Jim and Sheila often eat.  The must do because, when Sheila said that she had left at home the card on which she collects “restaurant points” she was told that she could delay paying until the following day when she had the card.  Now what UK restaurant would allow a customer to walk out on the promise of payment tomorrow?  We walked back to the motel.

That night it rained!  A lot.  Apparently more than 500mm in some parts of the city.  The small river, over which we had walked the previous evening, rose rapidly and at 6.00 am it was nearly over the road bridge. It dropped quickly after that but when we passed on the way to Jim and Sheila’s it was still much faster flowing than the previous day and a dirty grey/brown colour,

Our first task on arriving with Jim and Sheila was to take the emergency replacement credit card which had been delivered to them as a poste restante.  Ours had been used fraudulently in UK just after we had started travelling so after checking (by ringing the mobile phone during the night) the card was cancelled and a new account started.  Lots of frustration in arranging for the card to be delivered and lots of calls to help desks. 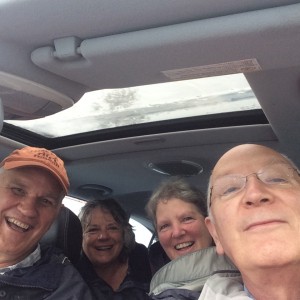 We decided to go visit Ali, Jim and Shela’s son, and then go out to lunch.  As we left the house it suddenly started raining hard and we ended up as a soggy mess in the car. We drove out to a restaurant called The Cellar Door which was attached to the Wimea winery near Richmond. The car park was developing 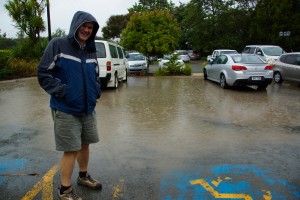 into a good pond. We had an excellent lunch and repaired outside to find it was still raining and the flood in the car park was getting bigger. Added to that, it was

blowing a gale. So we decided to return to the motel and hunker down for the afternoon.  I used up lots of wifi and progressed the blog.