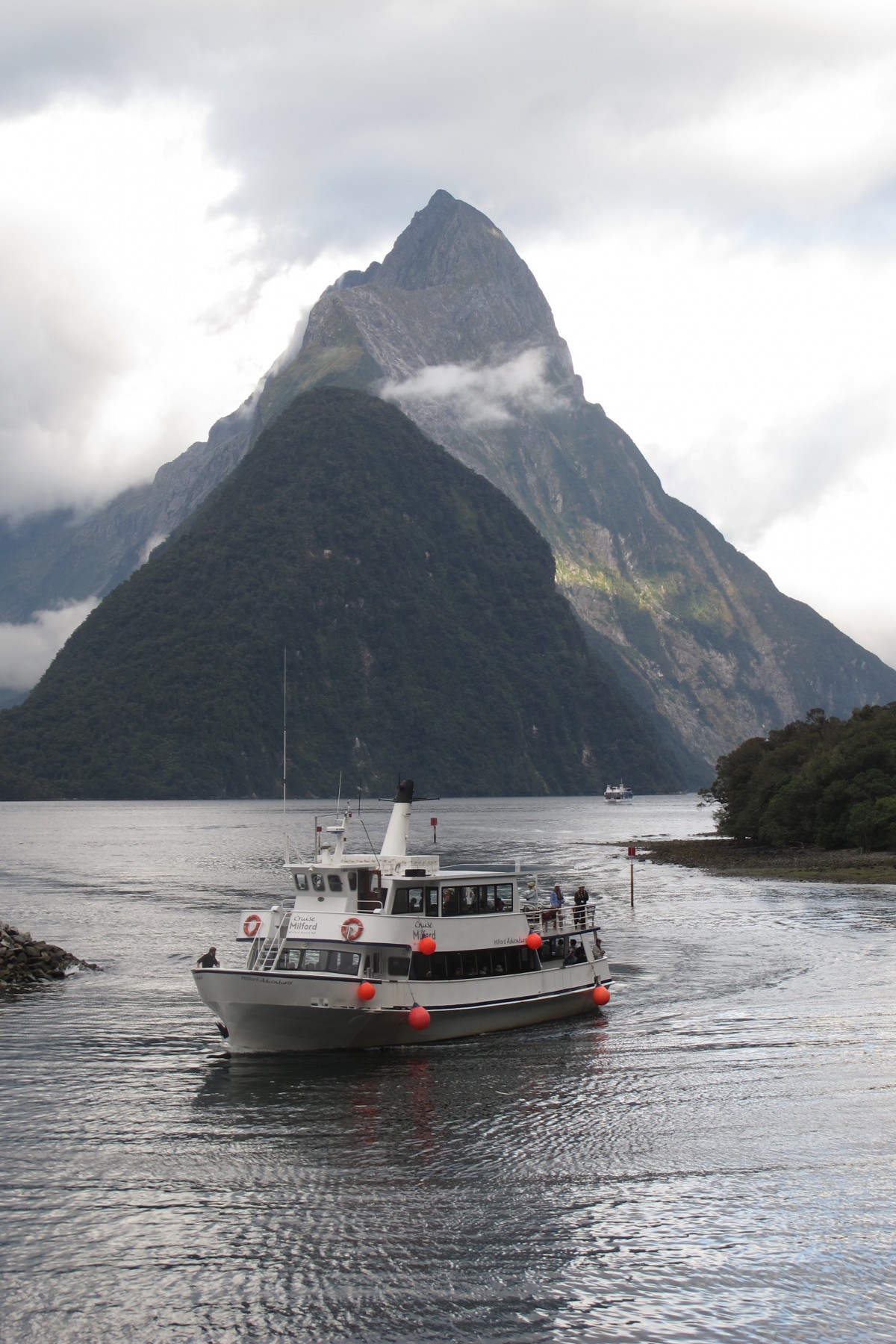 on Milford Sound followed by transport back to Queenstown.  When we got up there was another great view out of the window down the Sound. A cruise ship had come in for a passenger transfer and was lying off the harbour with an accompanying rainbow.

Having followed our usual routine of preparing sandwiches for lunch and having breakfast we handed back to the guides the back packs which we had borrowed from Ultimate Hikes.  All our belongings were then in the two large plastic inner sacks with which we had been provided.

At about 8.30 we set off to walk down to the dock for the boat which was to take us on the Sound which we boarded at 9.15 for a 9.30 departure.  We were shepherded by Andrew, one of the guides, while the other three prepared paperwork, loaded the coach and generally did whatever was necessary to ensure the operation ran smoothly for us.  They really did well for us, not only guiding and interpreting on the route but acting as front of house staff in the hostels.  Not particularly well payed, they do the job because they love the life outdoors. They were great.

A number of boats left the dock in fairly quick succession. We all went out towards the Tasman Sea for about 45 minutes then turned for home. The commentary by the skipper was pretty much inaudible to those of us who were on the upper deck but the boat company we were with had provided leaflets which gave a some useful info on what we were seeing. The day was overcast with a bit of a breeze and the boat was moving fast for most of the time so we were well wrapped up in fleece and waterproof jackets.

After we had turned for home the skipper took the boat close to a large rock on which were basking a number of New Zealand fur seals. Unfortunately we didn’t get to see any of the dolphins which often come into the Sound.

What was not lacking, of course, was scenery.  The glaciers which cut the fiord did a magnificent job and peaks, rock formations and waterfalls abound.

The final adventure on the voyage was when we approached the Stirling Falls at the edge of the Sound.  The boat went in and stopped with its bows almost under the waterfall. The speed of the dropping water created a strong down draft which helped to blast the spray onboard.  Quite an eerie experience.

Disembarking from the boat those of us opting for road travel rejoined the coach and set off down State Highway 94 towards Te Anau.  On the way we went through the Homer Tunnel, the struggle to build this is described in the leaflet.  Even today, it is a single track tunnel and vehicles have to wait while others come the other way. There is an electronic count-down system which tells drivers how long they will have to wait until the tunnel is clear. The half dozen or so who had decided to return by helicopter left us at that point to wait and see whether the flight would be possible given the weather conditions.

At Te Anau Downs the coach stopped briefly to drop off Isaac who was to be one of the guides for another hiking group on the Milford Track, starting that day.  Looking at the weather forecast we thought that they would probably have a damper walk than ours.

We stopped at Te Anau to eat lunch and to drop off two couples who had booked to walk the Routeburn Track immediately after the Milford.  Brave souls.

Back at Queenstown we disembarked from the bus and said our farewells.  A great experience and great people. Very well worth it.