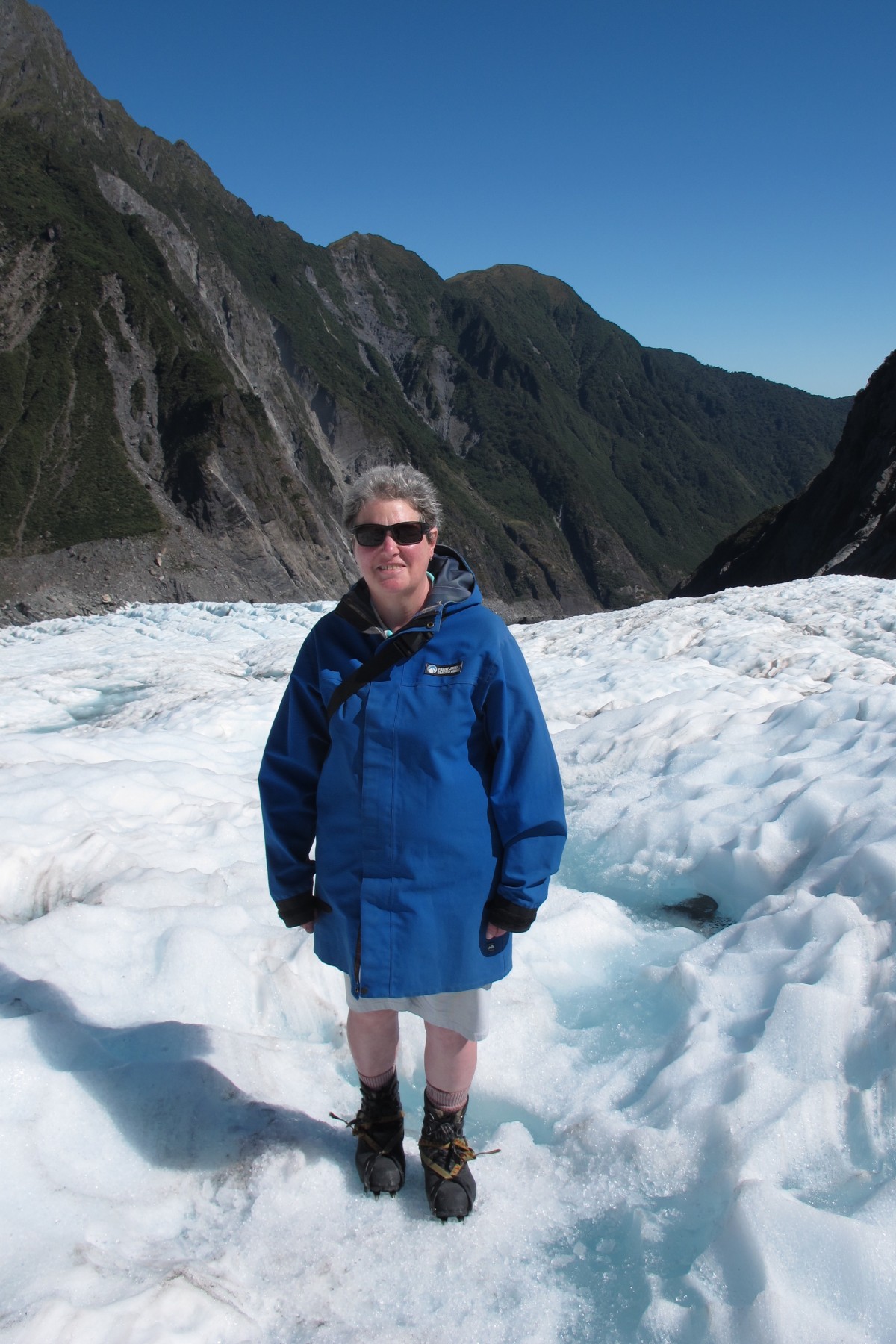 Our arrival in Franz Josef wasn’t auspicious. We were seated very politely in the hotel foyer while the manager tried to find out why there was no booking for us. Eventually the lines of communication between the Trailfinders, hotel chain HQ and hotel were straightened out and we were in our room. Phew. A slightly fraught moment, particularly since all the hotels/motels we had seen said firmly “No Accommodation”.

We checked out Heli Hikes that evening so we were prepared for the following morning. The guidance was that they would provide everything  we just needed to be reasonably warmly dressed.

So the next day we turned up to be issued with socks, boots, waterproof jackets and trousers, crampons and bags to carry things in. Once we were dressed and briefed we walked over to the helicopter-pad.  The ground crew said that they operate up to eight aircraft at a time from there.

Strapped in and with earphones on, we headed up to the glacier.  First we flew over the grey rocks which formed the fairly dry river bed at the bottom of the valley.  Then we were given a bit of a fly around as we ascended, turned well above the point we were to land at and then zig-zagged down to it.

The short path from the landing point to where we were to put on our crampons was slushy ice but it was still quite difficult to get used to walking on.  Crampons are a bit of an art too but once we were used to them we found that they gave us lots of grip.

Once we were all ready our guides led us off, using long ice axes to improve the path we were to take.  The day was hot and sunny and so there was a lot of melted water flowing around.  Normally it just flowed along channels it had cut in the ice but sometimes it just disappeared down holes, presumably to emerge later as under ice streams. Although there seemed to be quite a lot of rock dust in/on the ice our guides assured us that the water was good to drink and most of us tried it.  Not bad at all.

As we climbed we were going towards a very large piece of rock round which the ice was flowing.  The effect of the ice on pieces of rock was rather like the penny arcade game where you add coins in the hope that one of them will push others over the edge and down.  The movement of the ice was pushing bits of rock towards the edge of the large piece and, every so often, there would be a mini rock fall.  We were safely out of the way.

As we reached an area of more disturbed ice we turned for home.  Although the colour of the surface ice was whiteish, tinged with rock dust, in places where there were holes in the ice these could be an amazing blue. Towards the end of the walk we looked at an area on the other side of the glacier which was heavily crevassed.  It was obvious why exploration in the ice is a slow process.

The helicopter returned and took us directly back to the pad area.  When we got back to base we declined with regrets the offer of free use of the associated hot springs for the rest of the day and set off southwards along the coast road towards Wanaka.

As we went along the northern part, near Bruce Bay, the sea mist was rolling in but when we turned inland at Haast the weather got better. Along Highway 6 and across the Haast Pass.  Slightly disappointing.  We saw no indication and rather  missed it.

Driving South, Lake Wanaka appears on the right hand side of the road then you turn across a short piece of land and you are driving with Lake Hawea on your left. We were lucky to see them in sunshine when they were a beautiful deep blue.

In Wanaka we checked in to our B&B and asked the manager for a recommendation for dinner.  We set off for the Lakeside Inn where we had an excellent supper.  Slept very well afterwards thanks to my not noticing the beer I had ordered was 7% ABV and the extra couple of glasses of wine which arrived as a result of a bar error.