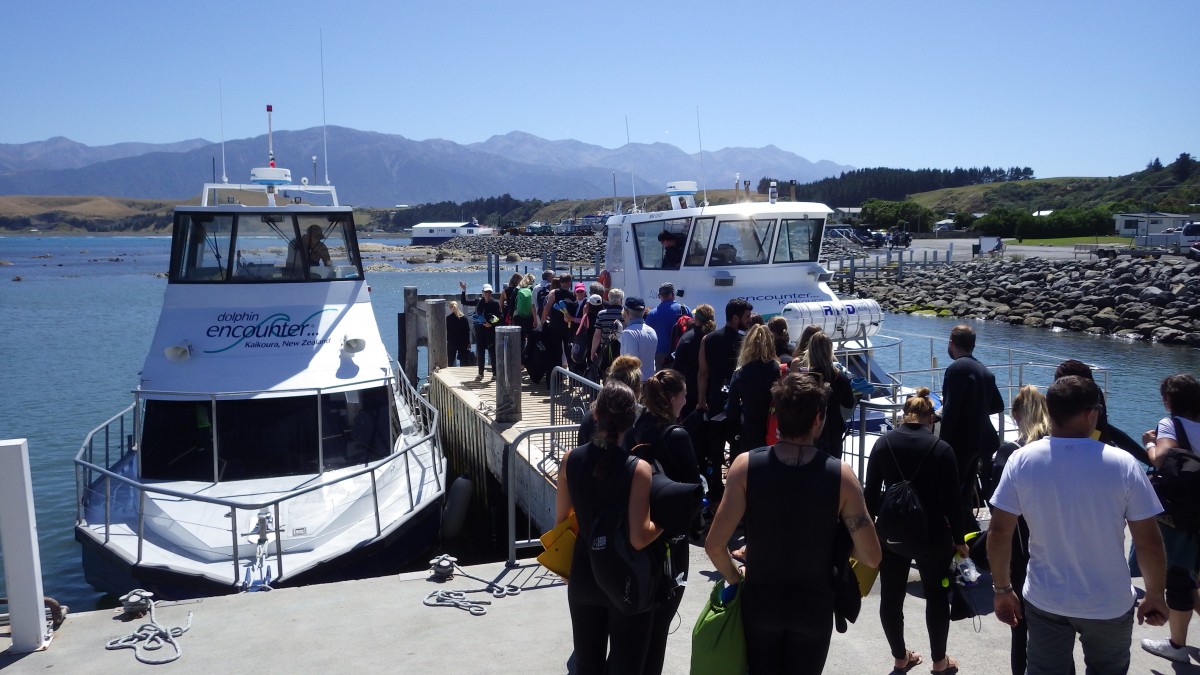 The alarm rang at 4.00 am and we got up, had coffee and a biscuit before driving into Kaikoura to book in for the 5.20 departure. The wind was still blowing. After a short wait outside the Encounters office we were all let in. The news wasn’t good. Conditions were forecast as a strong swell with wind-blown waves on top. Not sure whether the trip would go ahead. If it did, swimming was only recommended for confident sea-swimmers. After a bit of discussion, we decided that this probably didn’t include us and so we elected to cancel and returned, disappointed, to bed.

Later in the morning we went down to the Encounters office to process our refund. But we did want to see the dolphins so we asked if there were any places for viewing, not swimming, on the 12.30 boat. There were places and the weather was forecast to be better so we booked and went off to coffee and shopping.

Check in for the 12.30 boat was at midday. On the way down we saw these magnificent trees and couldn’t resist the photo opportunity.

Before the trip set off swimmers changed into wet suits and all going on the boat were briefed. Then we were bused down to the boat at the port in South Bay.

In the sea to the South of Kaikoura is an area called the Kaikoura Canyon which is an extension of a volcanic fault on land. Upwelling of water in this area brings up nutrients which sustains a food chain with the dolphins near the apex. A good place, then, to look for them.

The boat went out at speed to this area and we were soon among dolphin groups. The process used to give the swimmers the best opportunity of seeing dolphins in the water was for the skipper to manoeuvre the boat in front of an advancing dolphin pod then stop and drop the swimmers in. The swimmers then attempted to attract the dolphins’ attention by making noises and performing. This was very funny at times but the dolphins seemed to enjoy it. Once the dolphins had moved past the skipper sounded the boat’s siren to summon the swimmers back onboard before setting off for the next drop.

We spent over an hour with the dolphins and had a really great afternoon. We saw mostly dusky and some common dolphins and lots of sea birds including albatrosses. In retrospect it was probably best that we didn’t swim. But next time we have the opportunity we will practice snorkelling first and give it a go. One down side was that we didn’t make it to Nin’s Bin.